The Sackett Family in Westfield
A talk by Dr Robert Brown, director of the Westfield Athenaeum 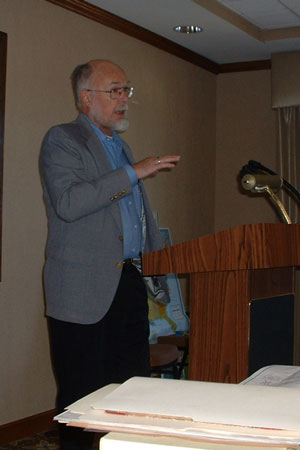 Dr Robert Brown spoke to the Sackett group on 20 September. He identified a number of Sackett places and handed out maps showing their locations.

In preparing for the talk, Dr Brown had carried out historical research into the Sackett family in Westfield, spanning the centuries from the arrival in about 1664 of John Sackett (1632–1719), son of colonist Simon Sackett, and one of the first few settlers in Westfield, to later generations and the Sacketts' eventual disappearance from the town.

The Westfield Athenaeum, founded 200 years ago by private benefactors, had among its collections quantities of donors' attic treasures, many unsorted. Recently discovered, and now catalogued, were three day books, of harness makers William Sackett and his son James, shoemaker Ozem Sackett, and Ozem's son, shoemaker and teamster, Aaron Sackett.1 These day books, dating from the 18th and 19th centuries, when hard currency was scarce, were used by traders, farmers, and townsfolk to record sales and purchases of goods and services, with an annual reckoning and settlement of debts. As well as detailing trading transactions, the books also contained records of births, marriages, and deaths. There were also a 19th century genealogical record of early events and a number of loose papers, deeds, wills, etc. Dr Brown had brought these items for inspection and, later, group members were permitted to photograph relevant pages at the Athenaeum.

Westfield was originally settled in the 1620s by entrepreneurs (Yankees) looking for fur-trading opportunities, not by religious dissidents (Puritans). Westfield became an extension of Springfield after that settlement was founded by William Pynchon in 1640. Until about 1730, Westfield was the western frontier of white settlement, later becoming the staging post for further western migration—to New York, the Ohio valley, and on west.

Thomas Cooper, a fur trader, and John Sackett, arriving from Springfield, bought land to the north of the Woronoke (Westfield) River. Lands to the south of the river were acquired by a group of settlers from Windsor, Connecticut, organized by William Pynchon's son, John, who was left in charge of the Westfield settlement. These settlers were more Puritan, founding a church in Westfield, and forming the town around their church.

The Sacketts were not amongst these "foundation men." Sackett land was mostly on the north (or Yankee) side of the river, and the Founders land was on the south side. The center of gravity of the town moved further west, away from the Sackett land.

John Sackett built a mill on the east side of town, but had little success with it because the soil was too sandy to hold water in the mill pond. [Several sorties were made later by members of the Sackett group to try to locate the site of the mill, but without certainty of success, despite the enthusiastic assistance of bemused residents.]

From early records and from their location, the Sacketts appear to have been active in commercial enterprises, but not so much in the religious or political life of the town. In Dr Brown's words, they were Yankees, not Puritans. His researches showed that, although the Sacketts prospered and were established within the town of Westfield throughout the 18th century, they were not prominent in church or town affairs. There seemed to be a hundred-year gap in significant recorded activity, and it was not until the Revolutionary period that Sacketts again made regular appearances in the records. Prominent amongst these was Captain Daniel Sackett (1735–1824) who, as well as his military career, served frequently on town committees. Other Sacketts served during the Revolutionary War, mainly as militiamen and minutemen who did not spend much time in the army. They would sign up for a month or so, march to a location where something was going to happen, usually arriving after the battle was over, and march home again.

Daniel Sackett and his brother Gad were prominent participants in Shays' Rebellion, the armed uprising in 1786 and 1787 in protest at harsh Government taxes and economic depression. Although their participation was well known, they were not prosecuted, perhaps because of Daniel's services to the town. William Shepard, a prominent citizen, provided protection by writing a letter in support of Daniel and Gad, ensuring that they did not have to flee the town.

Dr Brown provided copies of an 1870 map of Westfield, showing the flat lands of the "Sackett District", Sackett Road, and the "Lost Sackett Cemetery". During his many visits to Westfield, Association founder member Fred Sackett had searched for this "lost" cemetery. Dr Brown now believed that a cemetery in the woods towards the south of the Sackett District was the one Fred had sought. The area of the Sackett District where the lost cemetery was located had been known as Madagascar in the 18th and 19th centuries. Dr Brown observed that the cemetery contained a number of flat unmarked gravestones, which, together with the name, suggested its use as a slave or "plantation" cemetery. Quite why a number of Sacketts were also buried there remained a mystery.2

Sacketts were much in evidence in Westfield throughout the 19th century, with a number serving in the Civil War. In 1900 there were twenty Sackett households in the town. At this time, the whip-making industry was at its peak with twenty-two factories producing five million whips a year. Along with other townsfolk, many Sacketts were employed in the industry. Descendants of these families had moved away during the course of the 20th century, so that there are now no Sacketts in either Springfield or Westfield.

Dr Brown showed photographs of the Kellogg House at 14 Franklin Street, Westfield. The house was built about 1825–1830 by Warham Sackett for his daughter Henrietta, Mrs George Whipple. It passed to her daughter, Mrs Julia Kellogg, then to Julia's daughter Eliza Kellogg.