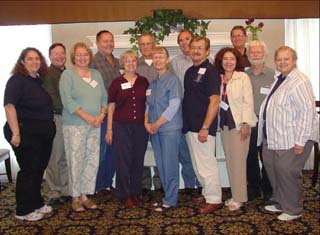 The 2006 reunion was held in Cambridge, Massachusetts, where Simon Sackett lived until his death.

I think all cousins in attendance would say that they had a great time. Twenty-three members were able to get together and spend time seeing the sites of the area, attend the FGS genealogy conference, and join each other for meals, discussing a wide range of topics. Many gathered on Thursday (a day early) to go to the genealogy conference. Although most of us did not get a chance to attend any of the conference, there was a great wealth of information out on the exhibit floor for us to take advantage of. Some bought books and software, while others talked to people who represented topics we found interesting. The Sons of the American Revolution, The Master Genealogy software group, and the Association of Professional Genealogists were just a few of the booths that I saw attendees exploring. Friday we had a wonderful tour by Lester and Mary Lou Sackett who showed us where Simon Sackett lived, the plaque that tells us about him living there, and a bit of history about how his wife married William Bloomfield after Simon's death and moved to Connecticut with Reverend Hooker's church. We saw the oldest graveyard where it is likely that Simon was buried since it was opened the year he died, but there is no record of him being buried there. On Saturday Don and Glenna Hertzler gave us a wonderful run down on the ancestor they found through his Civil War records and a diary from a friend of his that was in the same unit. It was really exciting to hear about this ancestor, his time in the civil war and his life later. 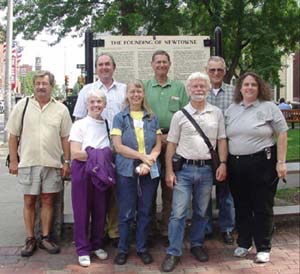 During the presentation we had several side discussions about the civil war and the information that can be found in many of the military records available at the National Archives. Several of the Sackett records that have been copied can be found at http://freepages.genealogy.rootsweb.com/~sackettmckayhistory/.

Following Don's presentation we had John Mangat-Rai, a friend of Lester and Virginia Sackett, who shared a great book he made on his computer for his family, (which we found out also includes a Sackett – I'm sorry to say I don't remember who the Sackett was). We wrapped up the official part of the weekend with dinner at Legal Seafood. The food was delicious and the company was great. Due to all the fun and the long time between this reunion and the next one in the United States, we discussed the possibility of having a reunion in August of 2007, around the time of the FGS Conference in Ft Wayne, Indiana to continue meeting more cousins and do a little research.