This occurred just after the murders at Northampton, and, at the same time, the Indians burnt in Westfield the house of a Mr. Cornish, and John Sackett's house and barn, with their contents.

About this time [1748] a skirmish took place in Marlborough, Vt., which has so many associations with persons and localities coming within the range of this history, as to claim a notice. A detachment of 42 soldiiers, under Captain Humphrey Hobbs of Springfield and Lieut. Alexander of Northfield, left the fort at Charlestown for Fort Shirley in Heath. Hobbs had halted in a low piece of ground, to allow his men opportunity to eat, leaving in the rear a small guard. Previously, one Sackett, a half-blooded Indian chief, supposed to be the descendant of a captive taken at Westfield, had discovered the passage of the party, and, with about 300 Indians, followed the trail, and coming upon the guard, drove them in. Hobbs did not know the strength of the enemy, but instantly commanded every man to take his tree, and fight. Confident in the power of his numbers, Sackett rushed in, and his men received a murderous fire, which killed a number, and immediately put the remainder upon their caution and their best behavior; and there the two parties fought for four hours. Hobbs and Sackett were old acquaintances, and the latter frequently called upon the former to surrender, and threatened in case of a refusal, to close in and finish the work with the tomahawk. Hobbs always returned a defiant answer, and bade him put his threats into execution. The determination of Hobbs was too much, and Sackett retreated, taking with him his dead and wounded—a large number. His force was at least six times that of Hobbs, while the latter lost but three men, and only three more were wounded.

… to keep the public mind agitated on the subject of grievances, measures were taken by the leaders of the insurgents to raise and organize a formidable band of troops in the county, and a committee of seventeen was appointed to carry these measures into effect. This Committee was requested to write to the respective towns assigned to it, directing them to meet and organize their companies, and to call them together for regimental organization. The Committee was constituted as follows: Capt. Fisk of South Brimfield, and Capt. Colton of Longmeadow for the 1st Regiment; Capt. Sackett of Westfield, and Capt. Day of West Springfield for the 2d Regiment; …

The Commission for granting indemnity to persons concerned in the rebellion went busily to work, and not less than 790 persons availed themselves of its offices. In the meantime, the trials of those under arrest came on in Berkshire, Hampshire, Worcester and Middlesex. These trials, of course, excited the widest possible attention and interest. The Supreme Judicial Court, sitting in Great Barrington, for the County of Berkshire, found six persons guilty of high treason, and condemned them to death, viz: Samuel Rust of Pittsfield, Peter Williams, Jr., of Lee, Nathaniel Austin of Sheffield, Aaron Knap of West Stockbridge, Enoch Taylor of Egremont, and Joseph Williams of New Marlboro. The following were sentenced to various grades of punishment for seditious words and practices: William Whiting of Great Barrington—£100 fine, imprisonment for seven months, and recognizance in the sum of £300 to keep the peace for five years; John Deming of West Stockbridge—a fine of £60, and recognizance in £100 to keep the peace for three years; John Hubbard of Sheffield—a fine of £100 and recognizance in £200 to keep the peace for four years; Daniel Sackett of Pittsfield—a fine of £60, and recognizance in £100 to keep the peace for three years. Six were also convicted at the Court held in Northampton, and condemned to death, viz: … [others were sentenced with various fines, and/or to be publicly whipped, or to stand in the pillory, or sit on the gallows with a rope around the neck for an hour] … Fourteen individuals were thus under sentence of death for leadership and acts of criminal violence in the rebellion, and a large number under milder sentences, for acting minor parts in the same revolt. One convict (Moses Harvey) a member of the House of Representatives, who was sentenced to an hour's occupation of the gallows with a rope around his neck, the payment of a fine of £50 and bonds to keep the peace and be of good behavior for five years, received his punishment, and this punishment, as will hereafter be seen, was the only one, of all those pronounced, that was ever executed.

In October of that year [1811], another exhibition was held on the public square in Pittsfield, and premiums were paid to the amount of thirty-one dollars. At this gathering, says Mr. Watson, in his history of the Society [the Berkshire Agricultural Society], "the number assembled was estimated at three or four thousand." An address was given by the President, after which a procession was formed, consisting of a team "of sixty yoke of prime oxen, drawing a plough, which was held by Charles Goodrich, Esq., Mr. Nathaniel Fairfield and Mr. Sackett, three of the oldest and earliest settlers of Pittsfield … 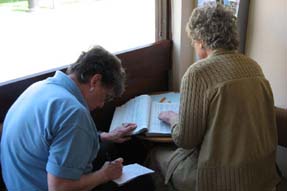