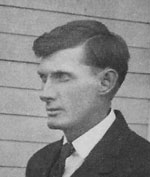 Francis Absolom Sackett
(1871–1952)
(Src: Myra Roper)
Francis Absolom "Frank" Sackett, son of Edward Curtis Sackett and Mary E Bradley, was born in IllinoisG on 4 September 1871.1 He died aged 81 in Tacoma, Pierce County, Washington StateG, on 14 November 19522,3 and was buried at Mountain View Memorial Park, Lakewood, Pierce CountyG.4
In 1880 Francis was living in Woodville, Greene County, IllinoisG, in the household of his parents Edward and Mary, and was recorded in the census as Francis Sackett, aged eight and born in Illinois.5
In 1910 he was living in Bluffdale, Greene CountyG, and was recorded as Frank Sackett, a self-employed farmer, head of household, single, aged 38.6
In 1920 he was living in Miles, Custer County, MontanaG, and was recorded as Frank Sacket, a railroad worker, single, aged 47. He was a roomer in the household of Charles and Minnie Jenkins.7
In 1930 he was living at St Louis Road, Wood River, Madison County, IllinoisG, in the household of his sister Elsie and brother-in-law George Race, and was recorded as Frank Sackett, a laborer in a car shop, single, aged 58.8